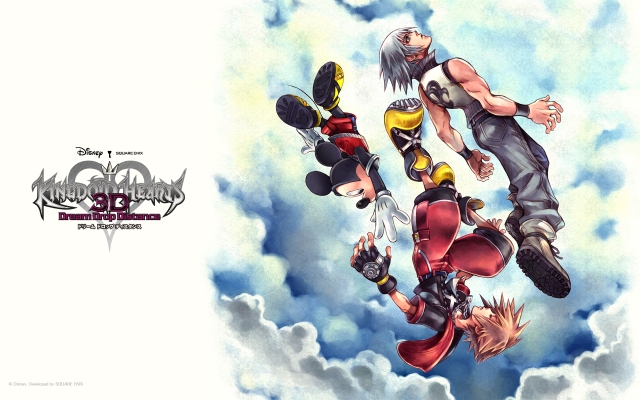 So lately, I’ve been playing a lot of Kingdom Hearts: Dream Drop Distance HD as part of the 2.8 Final Chapter Prologue collection (And that’s a mouthful.) I tried to play it before on the 3DS but something about the strange and unfamiliar mechanics (I had never played Birth By Sleep when I tried it so the Command Board was weird, plus the Dream Eaters) and the smaller screen between the controls seem to just give me an all around hard time getting into the game. So I figured that now I’ve solved some of those issues I could try it again on my TV.  Turns out, it works a lot better.

I figured since Dream Drop Distance introduces a bunch of weird mechanics that I’d share some tips that I’ve kind of figured out over the course of playing to make it easier.  The first of which would have to be the return of the Command Board.  A familiar installment to those who played through Birth by Sleep on the PSP or as part of the II.5 collection, the Command Board is pretty much all of your special attacks and moves be they special keyblade attacks or spells.  They each have a separate cooldown that is affected by your Attack or Magic Haste stat.  You start with a few slots but the list will expand as you continue through the game. The command board is your bread & butter in combat.  I generally only do normal attacks once I’ve put most of my attack commands on cooldown to fill the gap.  They do WAY more damage and have more Area damage options that your normal attacks. Don’t be afraid to experiment and find what attacks work better for your playstyle.  I tend to favor the “dive” attacks because they do area damage which is good for clearing out clusters of enemies which is very helpful when grinding.

The second big mechanic to keep in mind is the Dream Eaters.  Much like Pokemon Amie meets Nintendogs, you create these little spirits and can groom and pet them to your hearts content.  But why you would want to do so was confusing to me for a long time.  See, these little guys are more important than just being your fill in party members since Donald & Goofy are off doing their own thing during the adventure.  These little guys also give you your abilities.  Abilities being things like ‘Attack Haste’ or ‘Second Chance’ or ‘Magic Boost’.  How you get these is from a Dream Eaters’ ability link grid.  You spend Link Points to unlock nodes on the grid that grant Abilities or Commands.  And you get Link Points from leveling your Dream Eaters in combat, playing minigames or yes, petting them.  Petting them is especially important because petting or poking them in certain places can change their ‘Disposition’ (aka what attacks they use in combat) and a new disposition can unlock extra paths on the Link Grid (It’s the only way to 100% their grids.)

Flowmotion is the final mechanic and I don’t think I can really do it justice in text.  It essentially allows you to jump massive distances, up walls, and perform new attacks.  It takes get some used to but once you get the hang of it, you’ll be able to reach new areas, treasure chests, and skip a bunch of tedious jumping.  Don’t worry if you can’t get the hang of it though.  I’ve yet to encounter anything that you can’t get through normal jumping (or high jumping.)  There’s even some stuff like a friendly animal that you can ride on to reach areas in some worlds.  So you don’t NEED flowmotion, but it can make things easier/quicker.

The Pieces Fall Together

The other thing I’m really enjoying about Dream Drop Distance is that it is taking the time to finally start piecing the story together from all the various spin offs that the series has had since KH2 came out in preparation of well, the final chapter.  Tying in titles like 358/2 Days, Birth By Sleep and Re:Coded to the current going ons with Riku & Sora really helps to make the picture complete and help you to figure out how all of this fits together into a single story.  If you haven’t played one of the games, or you can’t remember, you’ll eventually unlock “Chronicles” which are text summaries of the events of each of the games.

However, the story isn’t flawless.  Mostly when it comes down to the individual worlds.  Of the first three ‘movie inspired’ worlds you go to – La Cites des Cloches (Hunchback of Notre Dame), The Grid (Tron: Legacy) and Prankster’s Paradise (Pinnochio) – two of them don’t put a lot of effort to weave Sora or Riku into the narrative of the ongoing plot like many of the other games did.  In fact, in the Grid it feels like our heroes aren’t even there half the time as the game just reenacts random scenes from the movies without context as Sora & Riku stand in the background.  Oh there’s scenes that advance Sora & Riku’s story as well, but they have little to nothing to do with the events of the world’s story.  Usually it involves Young Xehanort showing up with one of his many incarnations to taunt or mysteriously hint at things at our heroes before departing back to parts unknown.  I’m not going to say it’s a game breaker, but damn if it doesn’t just let the air out of any enthusiasm of going to the various worlds.

On that note, I’m not sure Square Enix quite understood the plot of the Hunchback of Notre Dame.  Because the random aspects they chose to focus on – and they are random.  Like the one scene with Pheobus & Esmerelda’s spontaneous romance with zero development that only makes sense if you’ve seen the movie – seems to imply that the writers were unsure of what the story was about.  Is it about Frollo hating “G–sies” for being ‘Free’?  Or Quasimodo overcoming his crippling fear of going outside not because of his visage but just because Frolo told him not to.  Heck, they have one scene about Frolo looking for the Court of Miracles that explicitly conveys the opposite intention of the original film (He WANTS to crush them ‘one by one’ instead of crushing them all).  It was just a weird world over all and nothing was given context.  It was like reading a cliff notes version of the Disney movie with half the pages missing.  Just weird.

Should You Get It?

If you’re a Kingdom Hearts fan and plan on playing the whenever-it-gets-done KH3?  Definitely.  Unless you already played it on the 3DS, because this version doesn’t add anything.  It removes some non-essential stuff like AR Codes and Photo Taking of the Dream Eaters (there IS a photo mode but it just removes the UI for screen shotting) but this isn’t a “Final Mix” incarnation, just a HD remaster of the graphics and ported to a console.  The follow up in the 2.8 collection, ‘Birth By Sleep 0.2 -A Fragmentary Passage-‘, also picks up literally right at the end of Dream Drop Distance’s Secret Ending, which might be spoilery if you haven’t played Dream Drop yet.