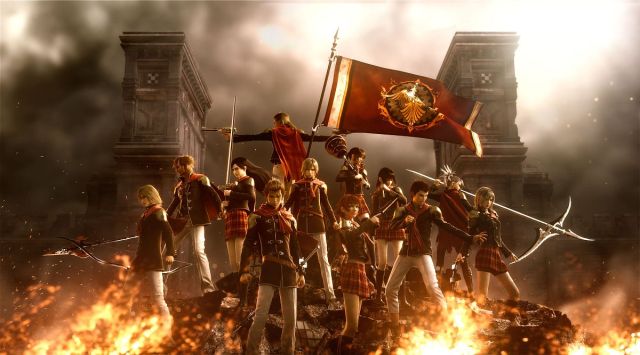 So I finally dove back into the deep deep upscaled waters that is Type-0 HD and decided to actually try finishing the game and in a tradition dating back to Garland’s time-travel dance turning him into Chaos in the very first Final Fantasy, the plot only becomes apparent when the game is 95% done.  In the case of Type-0 this takes the form of Chapter 8: Tempus Finis, or ‘The point where the developers remembered that this is a Fabula Nova Crystallis game’ – No, seriously.  They completely forgot this was supposed to be part of the shared mythology until the game was almost completed.  Hence why things like the l’Cie and fal’Cie are only briefly involved in the plot for the majority of it.  Heck, the name ‘Etro’ is not brought up until after the final boss I believe, and if Pulse and Lindzei are ever named its only in the Big Book of Exposition that sits in the library.  So yea, the first seven chapters of Final Fantasy Type-0 are pretty straight forward.  It’s a war.  You want to win it.  Your a super special awesome team of magic users that gets used and scapegoated and thrown under the bus to help win and take control of the four crystals.  Once you do that however, is when plot happens.  Tempus Finis.  The End Times.  Heralded in with a fade to black and some enigmatic words that leave you scratching your head going “Waaaah?”  That’s the ACTUAL plot arriving, and I will do my best to try and make some of this make sense.  Fair warning, from this point out there will be big time spoilers.

First, a little mythology.  Type-0 and the world of Orience were built on the shared Fabula Nova Crystallis mythology that is also used in the Final Fantasy XIII trilogy, and theoretically in Final Fantasy XV (Though recent interviews say that while the general concepts may remain, most of the names and plot elements have been changed up to make XV more of a standalone game).  The Mythology speaks of the God Bhunivelze who seeks to break through from the Seen Realm (Land of the Living) into the Unseen Realm (Land of the Dead).  The reasons for which can vary and are usually very complicated & ‘Greek Mythology’-y.  To accomplish this, Bhunivelze creates two fal’Cie – Lindzei and Pulse – and tasks them with the goal of breaking into the Unseen Realm.  In Type-0, this takes the form of breaking the seal on The Gate of Etro (Etro being a fal’Cie or sometimes called goddess of death).  To accomplish this, Lindzei and Pulse create their own fal’Cie with their own agendas for accomplishing this.  Lindzei creates Arecia and Pulse creates Gala.  Arecia and Gala are the primary figures that more or less set the plot of the game in motion via ‘The Spiral’.

Essentially, The Spiral is a cycle of 999 years when one of the four nations controls all four Crystals, a period known as Tempus Finis begins.  Tempus Finis is heralded by two things:  The appearance of Pandæmonium where a Judge awaits to see if any in this cycle are worthy to become “Agito” or the chosen ones powerful enough to open The Gate of Etro.  If no one proves worthy enough to be Agito, the second thing takes place – an army of unkillable neverending soldiers sweep across the world of slaughter every living thing with the goal of hopefully bombarding the Gate of Etro with enough souls that it breaks.  If neither of these events are successful, Arecia and Gala restart The Spiral back to Year 0 and the whole thing starts over for another thousand years.  Each iteration of the Spiral has the various nations start to discover their Crystals after about 157 years (Hence why the 999th year is marked as 842 RG on the calender. 842 years after the discovery of the first crystal.)  During which the Crystals will compete by creating l’Cie – superhuman warriors that are bound to the will of their crystal.  Only a l’Cie can enter Pandæmonium.  That is until the 600,104,971st cycle aka the events of the game.

In Chapter 8 of Type-0, Class Zero – Arecia’s pet project of prime candidates for Agito – manage to reach Pandæmonium and complete most of Gala’s – who has possessed a human host to act as Judge – trials and only failing because Gala becomes bored with giving a bunch of mortals a fighting chance at becoming Agito.  Class Zero actually has a chance to become l’Cie halfway through the dungeon but doing so only leads to the bad ending where they are pulled away from Pandæmonium and back to their home town to defend the Crystal they are bound to and eventually die prompting Arecia to restart the Spiral.   Instead, if you stay mortal, two friends of Class Zero who do become l’Cie give the rest of Class Zero the strength to battle the Judge and ultimately defeat him by ripping out his ‘phantoma’ (soul) – a talent that only members of Class Zero can do.

However, despite defeating the Judge, Class Zero can’t open the Gate of Etro.  Instead they return and with their ‘Mother’ that keeps them resurrected when they fall in battle missing they must face the real possibility of death after supposedly saving the world.  This breaks them and they start to panic, cry, etc. but they come together in the end and choose to face death together.  Their memories, along with everyone else who died, is passed on in a book to Arecia by Tiz and Joker – two characters that popped up from time to time but are actually supposed to be ‘Ten’ and Joker or the missing two “cards” from Class Zero.  Arecia observes the memories and sees how her ‘children’ – Class Zero – didn’t want to die in vain and didn’t want to be reborn or be forgotten.  Touched by these words and the confessions of the two friends turned l’Cie about all the journeys they had been on, Arecia decides to abandon the Spiral Project and to deactivate the Crystals.  She sends the two friends out into the world, freed from the l’Cie curse, to live and to thrive in a world where the dead are not forgotten.

So yea, that’s basically – as I understand it – what all happens at the end of the game.  Again, much like Final Fantasy XIII there’s a lot that isn’t explicitly stated but to its credit you could at least follow the basic plot thread all the way to the end without any additional reading.  You might be confused by things like… Why Dr. Arecia can stop The Spiral or why the heck the General from the White Tiger army is suddenly a god-like jerk.  Or even “Why is sky raining blood and everyone is dying?”  Valid questions.  The game does take an ungodly sharp left turn at the conclusion of Chapter 7 which pretty much just ends with the defeat of the White Tiger army cut to black and then uh-oh-apocalyps-o.  That’s why I figured I’d try to piece together everything I could to explain that ending so that other people wouldn’t get lost with the jarring shift in tone.

Also because sometimes knowing the ending can inspire you to try something out just to see it all.  That’s actually why I decided to play through Type-0, and why I read Stephen King’s Dark Tower…  which both are eerily similar in certain ways. Hmm.

I hope you enjoyed this little summarized lore dump on probably one of the most depressing Final Fantasy games I’ve ever played.  Seriously, Square Enix, way too many dead kids in this one.  Seriously.  (If you chose to play it, do keep in mind that it’s the only Final Fantasy rated ‘M’ for a reason.)