In case this is the only gaming/cartoon/WoW/SWTOR/I like cookies/rant blog you ever read (and we are very thankful for that. See! You even get the royal ‘We’ for it!) you may have not noticed this new fangled meme involving the number ‘six’ going around.  As far as I can tell it was originally started by Gnomeaggedon.  It goes something like this:

Simple, yes?  I have no clue where the idea to use the number six came from.  Maybe someone is hoping that all these related posts will grow and become sentient becoming Six from Battlestar Galactica? Or my personal favorite six: Cybersix!  Ah who knows. Let’s just kick this thing off.  Let’s see here, ‘Go into your image folder’.  Well, dangit. Which one?  I have one for WoW screenshot and one for SWTOR screenshots. So I guess I’ll just post one from each? That can’t hurt, right?

From the WoW folder… 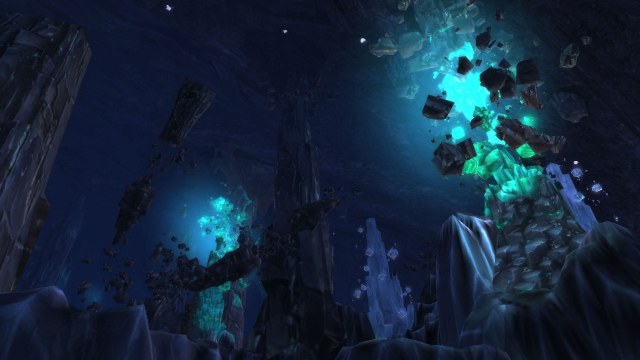 Well… uh… that’s pretty uninteresting. Isn’t it?  It’s just a pretty picture of Deepholm.  I took this picture to use as a wallpaper on my computer actually.  There’s just something about the textures for the environment in Deepholm that just made it look gorgeous.  I actually have quite a few pictures from down there, and it is hands down my favorite looking zone from Cataclysm.  I would routinely just fly loops around it while chatting with my guild, just for the great visuals the zone provides.  The story there wasn’t bad either.  It definitely served as a good follow-up to Hyjal in terms of ‘heroic deeds’.  First, you become the Herald of the Ancients (That would have been a nice title, Blizz.) and usher their return to the world to push back the forces of the Firelands, and then you descend into the Plane of Earth, to gather the various forces against the Twilight Cultists and rebuild the World Pillar.  If they had opened up the order you can do all the pieces in, it would have probably been my favorite zone of the expansion.

From the SWTOR folder… 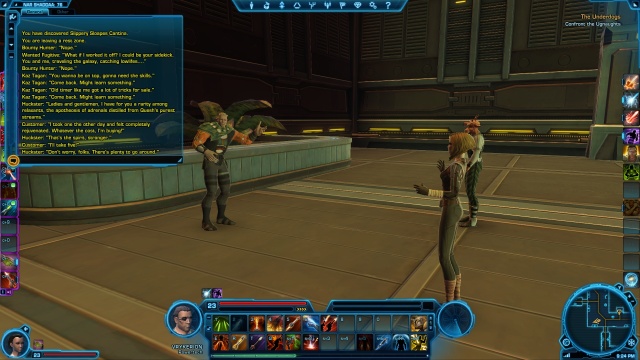 This image is probably the first “odd” from SW:TOR that I stumbled upon.  If you can’t gather the subtext from the text box, essentially one of the customers is in on the hustle and their duping the other customer into buying the adrenals he’s trying to sell.  Honestly, what really sold me on this little scene (one of MANY you can find in the game if you just wait around for them) is that it’s never made explicitly clear that one of the customers is in on the scam, unless you have seen or heard about this kind of scam before.  Not that it’s exactly rare.  It’s been played out in dozens of films, TV shows, etc.  But I do like that it’s not explicit, it just makes it feel more… I dunno. Real?

Also, you may now point and laugh at my keybindings.  My secret-not-really-shameful-shame hast been revealed!

From my Pictures Folder…

Oh! Finally something that actually has sub-folders!  Now let’s see.  This photo is… oh.  Oh no.  Oh science, this is gonna be painful. 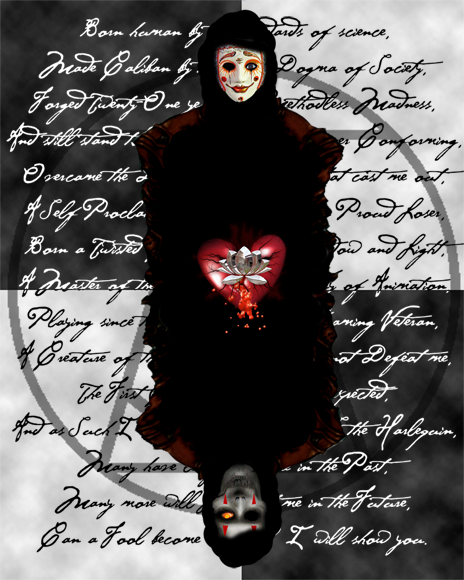 Yeeeaaa… this is gonna require A LOT of explanation I imagine. This is actually an old project from college.  It was supposed to be a “metaphorical self-portrait”.  Cheesy as that sounds, I had fun doing it.  Although now that I’m looking at it, I can’t really recall what I was going for with most of this.  I dunno the face card style figure with the happy & death faces is supposed to be a reference to me being bipolar.  The words in the background are…  barely readable. No clue.  I’m pretty sure most of this probably had a deep significance to me seven years ago, when I was back in college and still cared about things having a deep significance. (Film school & Shakespeare classes killed that. I don’t care about what deep metaphorical message Orson Welles was going for by putting the moon in the upper-right corner, or why Shakespeare used more p’s & g’s in one half of a sentence than the other.)  Still, in the end, I think it’s a pretty cool picture for messing around in Photoshop for a few hours.

Well, those are my images for this thing going around.  Now my task is tag some more to pass this crazy thing along.  I have no idea who has already been tagged or not, so I’m just gonna tag people who I haven’t seen post one of these things yet.  So pardon me for any redundancies! Regardless, these are some awesome people. Definitely check out their stuff!

6 thoughts on “The Thing With the Sixes?”