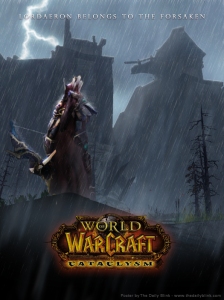 If there is one thing that’s got the Alliance and the Horde talking during Cataclysm it has to be the Forsaken.  The verdict is more or less in on some of the other major shake ups: No one likes Garrosh, everyone tolerates Variann, and no one is happy about losing Cairne.  The Forsaken on the other hand are still a constant debate.  Have they gone evil?  Will Sylvanas be the next Kael’thas?  Do the ends justify the means?  All very good questions on how this whole situation is shaking down.

I just finished all the Lordaeron quests (Tirisfal/Silverpine/Hillsbrad/Plaguelands) and I have to say – Sylvanas doesn’t really strike me as “evil”.  Disobedient and delusional maybe. But certainly not evil.  The big thing here is that Sylvanas quite clearly adheres the motto “the end justifies the means” and is quite open to any and all solutions to get the job done.  Including using the New Plague to ensure victory, and employing the Lich King’s creations to help repopulate your dwindling armies – because let’s be honest here. The Forsaken are not a “race,” they are the Banshee Queen’s private army.  They’re raised in service to Sylvanas, they cannot reproduce and they eventually all succumb to becoming mindless zombies.  The ONLY reason Sylvanas has a reason to continue to raise more from the dead is to pad out the numbers of bodies she can hurl at her opponents.  She is a brutal tactician who we have seen several times over has no issue disposing of even her closest allies if they stand in her way or betray her.

Which is why I think that Sylvanas isn’t lying to the orphan during the Children Week quest.  While she make think that Garrosh is an idiot, She – like Vol’jin – has no reason to betray the Horde. Or at least not yet.  Garrosh called her out on using the Val’kyr but did not forbid it and while he did forbid the use of the New Plague, no one has stepped up to call her out and showering Gilneas and Southshore with the stuff (Despite speculation that Garrosh knows it’s happening).  I think the big line that is preventing the Forsaken from splintering from the Horde is that the Horde is fully willing to give control of Lordaeron to the Forsaken and the Banshee Queen. Which is only that they apparently want at this point. Granted, it’s easy to speculate where the lust of power can lead Sylvanas and her people, but at least she didn’t succumb to worthlessness after claiming her vengeance like Maiev (who for all we know is still sitting on Illidan’s rotting corpse to make sure it doesn’t run off.)

Still the choices she’s making are not the smartest ones.  Breaking orders, making pacts with creatures created by your enemies (Especially foolish considering how many demon lords have stabbed her in the back), and forceful purging your subordinates of emotion are historically all things that in good drama tend to come back to bite you in the end.  I think the big turning point in the entire story of the Forsaken in Cataclysm will be the fate of Koltira Deathweaver.

Koltira is an example of one of my tropes in fiction – the noble dark knight. He knows he serves the Horde, but has respect for his Alliance opponent.  He believes in strategy and mercy over brute force and savagery.  He is level-headed, neither quick to anger nor impatient.  This unfortunately makes him less useful in the eyes of Sylvanas Windrunner.  So after claiming Andorhal for the Horde, Koltira is hauled off to “beneath the Undercity” to essentially be reprogrammed to be more in line with Sylvanas’ wishes. Namely, purging him of all those problematic emotions and turning him into the perfect, loyal, tactical, killing machine for the Forsaken.

The problem with that plan however may be the fact that without those pesky emotions that Sylvanas wants beaten out of poor Koltira, his priorities may be shifted along with it.  Naïve and sympathetic concepts like “loyalty” may not mean much to New Koltira, and now Sylvanas has two unpredictable elements that formerly served the Lich King in her employ.  Honestly, I think Koltira and the Val’kyr stand a good chance of betraying Sylvanas and putting her in a rather rough situation.  She has full force put her blind faith in the power of the Val’kyr and she has probably turned one of her best assets into an emotionless harbinger of death.  Considering Blizz was eager to tease the plotline that resulted in Zul’Gurub returning as a 5-man in the new low-level Stranglethorn Vale quests, I think it’s well within the possibility to see Koltira and the Val’kyr becoming a new heroic dungeon in the future.

After all that, Sylvanas might start reconsidering some of her bold choices since returning from Northrend.  That’s my guess anyway.

3 thoughts on “Drama Belongs to the Forsaken!”