Okay, how come every single time I end up talking about Dun Morogh, it also ends up being some kind of kinky innuendo laced sex joke?  What is it with dwarves anyway?  They like putting some boom in the bedroom, dirty old priests hide out in their backyard, and now I find a mild mannered dwarven hovel that has a basement ripped straight from a trashy harlequin novel! 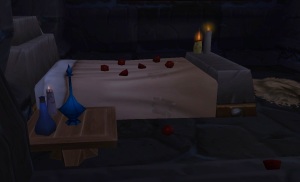 Imagine it, you come home from the frozen and icy hills of Dun Morogh, just getting off patrol and stopping some random Horde warlock punk from blitzing Kharanos with a rain of fire from atop the roof of the tavern, and the first thing that hits you is the immense warmth of a roaring fireplace.  You follow the stairs down around the edge of the interior to find rose petals strewn across the bear skin rug.  Following the fragrant path of rose petals, you find they lead you right into a warm cozy bed full of hairy dwarf manliness!  Strikes quite a picture right? 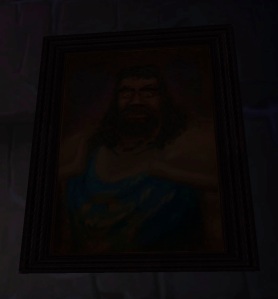 Speaking of pictures, there’s a downright creepy one right at the bottom of the stairs with big googley eyes.  It almost looks like one of those pictures from Scooby Doo where the moment Shaggy and Scoob wander off, the eyes start following them because they’re actually just the bad guy hiding behind… the… portrait…   HEY WAIT! You don’t think that’s what is going on here, do you?  Some decked out trashy romance scene set to lure in unsuspecting dwarves into a moment of sweaty dwarf banging while whoever is secretly behind this painting is watching?!  Oh god!  I knew there were some messed up people in Azeroth, but they usually are fairly identifiable by wearing dark colors or overly dramatic monologues.  This is…  this is just disturbing.  Who do you think is hiding behind that picture?  Has to be a dwarf.  A gnome would rig up a more elaborate system of self-editing video cameras, and humans…  well, they have Goldshire now don’t they?

I can only imagine that this elaborate set up was put together by a fairly lonely dwarf.  I mean, in a society that is built on a total of two principles: Studying the past and getting #$%&-faced, you can only imagine that dwarves would be going at it like bunnies whenever they found the chance (Perhaps that explains all the actual bunnies as well.) So what kind of dwarf would want to build this love bungalow just for the purpose of spying on OTHER dwarves getting lucky?  Must lead a sad, sad life.  I can only imagine this degree of voyeurism is probably illegal too.  Which would explain the four guards standing outside to guard this little house.  They’re waiting to catch this depraved and disgusting dwarf!  That or their taking turns using the umm… “facilities.”