Warning: This post contains spoilers for the Trooper storyline in Star Wars: The Old Republic.  If you would like a spoiler free summary of the storylines, you can find them here. 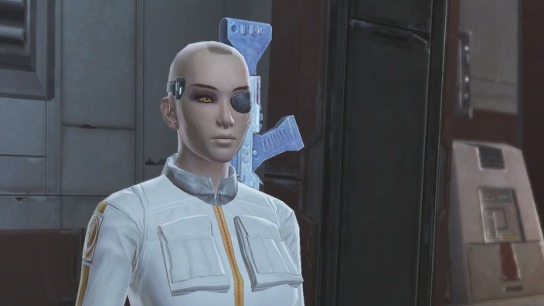 The trooper was the first class I ever played way back in the November beta weekends of the game.  In many ways it was the class that introduced me to the game and its mechanics.  Really it was a choice of elimination.  The Jedi and Sith areas were crowded beyond belief, I wanted to play a Bounty Hunter when the game launched, and I had no desire to play a squishy ranged class when I was first learning the game.  So the heavy armor wearing republic trooper seemed the logical choice for testing out the game.

I was lucky that the trooper’s storyline has probably one of the best starts in terms of prologue.  While other classes spend the prologue establishing the status quo and familiarizing yourself with some of the major NPCs you’ll be getting to know, the trooper storyline pretty much jumps right in and uses the prologue as an establishing point from the starter world in terms of the story.  While the Jedi Knight and the Consular don’t get the story rolling until Coruscant, by the time you finish the trooper starter world you’ve already established your primary antagonists and your mission.

My mistake was going for a pure light sided trooper.  See, light side and dark side choices are interesting for non-force users.  It seems to vary from class to class, but for the trooper the light side choices tend to be “For the People/Republic” and the Dark Side choices seem to be “For the Military”. So if you’re on orders to stop someone who may be innocent, arresting them would be a dark side choice, and trusting their word that they are innocent is a light side choice.  Whether or not they are innocent is not the question, but who do you put your trust in.  My first trooper in the beta was pure light sided.  Always took the high road.  And you know what? He was one annoying dude.  Like cheesier than Superman but with none of the depth that defines their moral path.  I wanted to smack him.  When I made the trooper that I’m basing these reviews on, SHE (FemShep ftw) is a cold, logical military cyborg.  Light or dark is irrelevant. She does the mission and chooses accordingly. She listens to her superiors and her superiors only.  That’s how she’s “programmed”.  Kinda like a bad ass military Robocop.

But I’m getting ahead of myself.  Let’s just say that if you’re looking for a good place to jump in for a solid story, the trooper is far and away the best place to start.  Anyway, let’s hop into it:

Welcome to the Republic Military, and more specifically to the elite unit of Havoc Squad!  You’re apparently so elite, that despite your fellow squad members being armored to their teeth in the latest defensive gear, you start out wearing a t-shirt and pants.  T-shirt.  And pants.  That are heavy armor.  You’ve got to be kidding me.  I really get to start out like that?  Oh well.  Pretty much most of the story for the trooper on Ord Mantell involves a powerful (and expensive, seeing how they keep mentioning the cost of the thing) missile that could easily level the whole island.  It was stolen by the local separatists who apparently don’t much care for the Republic or their planet being part of said Republic and it’s up to Havoc Squad to track it down.  Mostly you, with an occasional cameo by the other Havoc members to assist in an interrogation… or opening a door.

It’s a constant hunt as the separatists are routinely one step ahead of you.  They kill your contact and move the device from the base just before you get there, so your only lucky break comes in the form of bribing a couple of separatists moving the thing who contracted radiation poisoning from it with medicine.  (Whether you give them the medicine or not is naturally up to you.) Ultimately, you find out that the separatists have moved the bomb to their volcano base – a plot point that I consider to be one of the most AWESOME things on the planet.  I LOVE secret evil volcano lairs.  There you find out that the Seps are receiving aid from the Empire, which pretty much shocks no one.  Still, it’s the only republic class storyline that directly involves the Empire as early as the starter planet (Yes, they’re technically there in the Smuggler storyline, but they don’t have anything to do with it.)

Then the merciless and cruel twist happens.  You wanna know how they knew to always stay a head of you?  Turns out that all of Havoc Squad sans you is actually defecting to the Empire and the stolen explosive is their ‘gift’ to their new bosses.  The reasons given are that the Republic doesn’t value the efforts of ‘True Soldiers’ and already I’m having Metal Gear flashbacks.  Is Tavus just Big Boss with a bitchin porn stache?  Luckily you deactivate the bomb before they can get away with it.  And then it’s off to Coruscant to start the hunt for the traitors.

We are also introduced to Jorgan Von Strangle… er… I mean Aric Jorgan.  A Cathar soldier that ends up being your first companion and first replacement member in your new Havoc Squad.  Jorgan is a career soldier through and through.  He doesn’t care for politics, he only wants to do his duty.  I find him annoying and repeatedly demean him as “Sergeant Meowmers”.  He starts out as a grumpy ass because he got demoted as a causality of Tavus’ defection, he continues to be a grumpy ass because he’s Jorgan.  Let’s be fair.  He’s just a grumpy guy.  How he ‘endears’ himself to you on Ord Mantell is constantly chewing you out for every mistake.  The only pleasure in this is that you can kick his butt once you’re his superior.

Ord Mantell does a great job of setting up a conflict, giving you a villain, giving you a personal reason to want to stop them as well as a professional one, and does so with a satisfying totally makes sense but didn’t see it coming twist.  Tavus dismisses early concerns about the Empire being involved, no one outside of Havoc Squad and Jorgen knew about the operations to tip off the Seps, and because of the tip offs it seemed perfectly justified when they left you behind during the Volcano mission due to your perceived “failures”.  Out of the Republic classes, this one is probably my favorite starting planet story.  It’s not epic like the Jedi Knight, it’s not funny like the Smuggler, but it gives you all the groundwork in a nice neat package.  If only the same could be said for…

There’s always one planet that just doesn’t need to be there, isn’t there?  Coruscant is where most of the republic classes get the set up for their act 1 stories, but for the trooper it’s just a bunch of mini stories lumped together by the overall strand of hunting down Tavus’ mentor who might have a lead as to where the traitors might be going.

It’s not to say there’s not some shining moments in all of that.  There’s a great moral dilemma in the mission to stop the mad scientist from turning people into living time-bomb cyborgs.  You find a group of test subjects that may or may not have been turned into weapons already.  They’re sleepers, so even they wouldn’t know until it was time to go on a killing spree.  It’s a huge risk to let them all out, and there’s no way to know if one or all of them were cyborg-ized, so the choice comes down to kill them or not.  The safest choice is to kill them really.  There’s seven of them or so and if just one of them goes nutzoid on a crowd of people that’s likely far more than seven dead.  But you don’t KNOW if they will.  So you might be killing a small group of completely innocent people.  It’s really good, and actually gave me pause to think about what to choose the first time I encountered it.

The other scene I really liked was when you get called to a senate hearing about the rumored defection of Tavus and the former Havoc Squad.  The General does her double speak thing where she can’t TELL you to lie, but she isn’t telling you to be honest with them either.  So you get in there and you get to play CSPAN where you can be completely honest with the people who help run the entire Republic, or lie to them, or just be really really ambiguous.  I’ve seen enough ‘A Few Good Men’ to know to go with option 3.  The best part comes right after you finish Coruscant and have to go to a space station to save the one senator who gave you the most crap during the hearing.  You can choose to let him die to go after the Havoc traitor that kidnapped him, or save him and let the traitor go.  (I saved him. Mission first, revenge later.)

Coruscant was mostly a kind of bleh planet to my trooper.  A few memorable bits, but overall there’s nothing to really get you ramped up.  Mostly I just sat there rolling my eyes saying “Can I PLEASE go kill the backstabbers now…”  You get introduced to some reoccurring characters like your superior General Garza, and the always awesome Jaxo.  Honestly my first impression of Jaxo was ‘Why isn’t this awesome chick on my crew instead of grump sergeant meowmers?’ Though a few less than spoiler free glances at TORHead may or may not suggest there’s a reason for that.  I stopped looking once I realized it might spoil anything, but I get the impression that there will be much more with Jaxo later on.  Consider me excited, Jaxo rocks.

The Trooper Prologue is probably one of the most solid starts to a story I’ve seen thus far in the game.  As I said before it firmly grounds you with a personal and professional beef in the events.  The biggest shortcoming was the meandering nature of the Coruscant story arc.  A lot of it felt like padding before the real adventure resumed in Act 1.  I mean, would it have been so bad to actually have Wraith, the traitor you square off with during the senator kidnapping, be the one you were chasing throughout Coruscant?  She is an infiltration expert, so sliding around the lower levels is not out of the question.  Working underworld contacts to help secure a potential re-invasion of Coruscant?  Maybe? I don’t know.  All I know is that at the moment the whole mentor thing just felt like an unnecessary bit to give us something to do.  But maybe that will change.  Maybe the mentor will come back in a later chapter, and I’ll eat my words on this.  It’s not the first time.