There some days I have a hard time logging into an MMO. I play, I get in ruts, I take breaks and sometimes when the opportunity arises I will take a vacation.  Well, an opportunity dropped into my lap when Raptr sent me an email declaring that I had earned a “Raptr Reward” giving me a free standard copy of RIFT and 30 days of play time with the potential to get a special goggle hat and an upgrade to the special/collectors/super happy funtime edition.

Now I had some brief interaction with RIFT way back when they first started offering the 7 days trial and I wasn’t really impressed. The soul system had some neat concepts but I found extremely confusing having to dive into a game that I knew nothing about and just started picking things that looked good.  It kind of reminded me of back when I started playing WoW and I had a melee hunter that stacked strength and had some weird build that mish mashed talents from all three trees.  It’s no Ironman, but I definitely found a way to make the “huntard” a very difficult class to play.  But with 30 free day and possible upgrade to a fancier edition dangling in front of me, I said “Hey, why not?”

Deciding on a character wasn’t hard. You have a choice between some God Freaks or a bunch of technology orientated heretics who believe in “making their own miracles”.  Uh… Yea.  Defiant all the way.  I just don’t get the rationale of playing a character who’s beliefs are “I’ll just wait and the Gods will do it for me.”  On top of that, the male models for most races are pretty damn ugly.  Like Orc ugly.  Yes, even humans.  So I went with a woman.  I chose the Rogue path for her because it allowed me to be a pet-class hunter and later maybe switch to stealthy stabby stab rogue, but also because the hunter version plays ALOT like it has no auto-attack which is more comfortable after months of SWTOR. And since Vrykerion sounds weird as a girl name in my head, I’d like you all to meet Valkyrion (see what I did there?):

The game itself is actually quite fun.  They cleared up the earlier confusion with the soul system by adding in the option to use pre-determined ‘builds’ that automatically show you where to allocate all your points and which souls to use.  It won’t get you peak efficiency but it will give you a decent build to play with.  The cool thing is, when you reset your souls you can switch to a different build, or use one of your own devising.  So my pet using hunter rogue can easily switch to a stealthy stabby rogue.  They do the same thing in D&D Online and it REALLY helped there, especially since 3rd Edition is a brick of complete and utter confusion for me.

Once you get past the opening area – which for the Defiant is a rush to get you, an engineered super being, to a time machine to send you back and change the future (Awwwesome!) – the world opens up and you get introduced to Rifts and other dynamic events that are constantly going on in the game.  This is actually really cool.  Bunches of little side things you can do along your journey.  Though I will admit, by the end of the first zone (Freemarch for me), it was getting kinda irritating to bumble into a rift or actually pull a bunch of invaders while I was questing.

The story in Freemarch is pretty cool, a bunch of cultists who serve the big bad evil guy have started raising the dead around the area, and have been making life pretty unreasonable.  On top of that, Water cultists (not associated with the death cultists) have been mucking about the shores causing all kinds of trouble.  You have to stop them AND defeat the undead army they raised.  It ends with you defeating the undead… uh… king? General?  You know I was never 100% clear on that.  Either way, it was pretty cool.

Finally, the last thing that I really liked about my visit to RIFT was getting to see how the game handles ‘collectibles’.  Books of lore you find lying around? They get added to your own personal library in your character tab.  Achievements? A TON of them just in the first zone! Kill 4 rares in the zone, kill X many undead, jump from a bridge, kill squirrels…  And they reward titles! Both prefix and suffix titles!  Oh man, just imagine the achievements from the Molten Front – now apply that same thing to every zone!  How cool would that be?  I’d have a blast with that.

Also, RIFT has these things called Artifacts.  Around the world you’ll find these little sparkles that will reward you with random artifacts, you collect them in sets in your character tab.  After you complete the set, you can turn them in to the capital for pets, supplies, and currency to buy new vanity items.  Some items actually belong to multiple sets, so you’ll need to keep searching.  But imagine how that would work with Archaeology in WoW!  Instead of just vendoring common artifacts, you’d collect them as part of sets and turn them in to get things like transmog items.

Honestly, I was blown away by some of the stuff in RIFT.  Especially for my inner completionist who likes to get all the little doodads it looks like a great game.  It also reminded of the one thing I’ve been missing while playing SWTOR – A simple rotation.  My hunter rogue uses like 5 keys.  FIVE.  You know how many keybindings I use on my Jedi Guardian? TWENTY-FOUR.  And a normal rotation without any cooldowns or OH S$%&* buttons is at least 10-12 buttons.  Now do that for every fight.   Not to completely slam TOR or anything, and it is pretty cool how much you can do in battles, but it was nice to revisit a simple single digit number of buttons.  I have no idea how I’m gonna cope when Mists of Pandaria comes out and I have to re-acquaint myself with auto-attack.

RIFT has officially earned its place on the list of ‘viable alternative MMOs to vacation in’.  Partially by the fact that I got the game, a collector’s edition upgrade, AND a neat hat with goggles on it for free, but it’s also a very fun game in it’s own right that definitely shares many familiar traits with World of Warcraft but still boasts a favorable number of features and methodologies that are both different and very welcome.  Some day I may even get to try out some of these fabled solo-raid thingies I keep hearing about.

All in all, it was a MMO vacation well spent.  This calls for a meme reference! 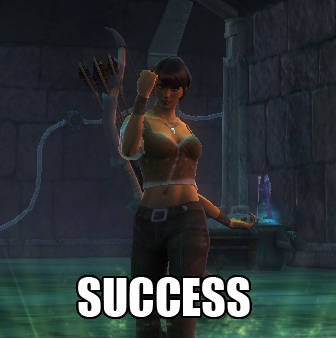 2 thoughts on “Greetings from Telara: a MMO Vacation”