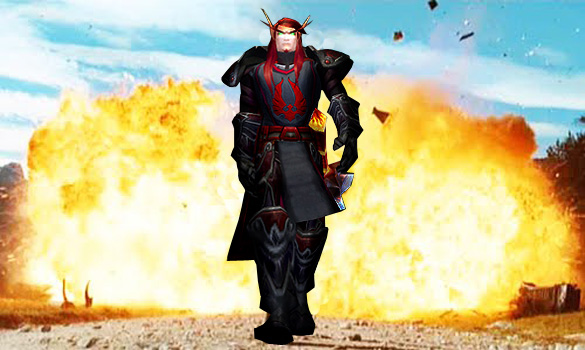 If there was anything that I could honestly say that Cataclysm did that I loved, it was advance the storyline for the entire world.  Well, the old world at least.  There’s still some timey wimey whatever stuff going on in Outland and Northrend – but this isn’t about that.  No, this post is about the blood elves.  More importantly the complete and utter lack of story involving them in Cataclysm.  The same could be said for the draenei, but I don’t know nearly enough about them. So I’ll leave that to other bloggers.

But there was a huge missed opportunity for the sin’dorei in my eyes.  They could have become a major player in the new Horde.  Especially with the Forsaken now dead set on conquest of the Eastern Kingdoms, it will only be a matter of time before they have to cross blades with the Argent Crusade who have firmly rooted themselves in the Plaguelands, and with an army backed by a new font of holy power lying just to the north, one has to wonder if Lady Sylvanas would reach out to old friends in order to complete her mission to claim all of Lordaeron for the Forsaken.

But that didn’t happen.  In fact, despite the successful reclamation of the Ghostlands by a unified force of Forsaken and Blood Elves, there is little to no mention of their ‘friends to the north’.  Perhaps they fear the Sunwell’s possible effects on the undead?  Or maybe there is underlying mistrust after the betrayal of Prince Kael’thas?  Who knows.  The real question for me is more so, if the timeline for WoW has indeed move forward…  what exactly is going on beyond the forests of Quel’thalas?

What We Have Here is a Failure to Conspire

The question is really based on a small insignificant piece of dialogue from Wrath of the Lich King, where there were hints of a frustration in the ranks of Blood Elf society.  Despite Regent Lord Lor’themar’s decision to stand with their new found allies in the Horde then with the corrupted Kael’thas and his fel-tainted elves during the battle for the Sunwell, Ranger General Halduron Brightwing urges Horde players to not get involved with Lor’themar’s political scheming with the Grand Magister Rommath during the quest to reforge the ancient blade Quel’delar.

Political scheming? What’s this?  Is there something going on here?  Not entirely surprising since much of blood elven culture has been one of duality.  There is the seen – a simple tailoring shop – and the unseen – that uses demons and slave labor.  Even the guards seem to be on duty to prevent anyone from seeing the tears in the seems of the blood elf society.  The protesters in the Bazaar are quickly silenced and brain washed into behaving, the constructs patrolling the city shout off things like “happiness is mandatory”, and I will remind you that these were all occurred after Lor’themar assumed the role of leader.

Could it be possible that the blood elves are trying to reclaim their former glory through dystopia?   Praise the glory of the sin’dorei or be silenced forever?  It would go a long way to explain why Halduron would go the distance to make contact with the high elves during the crisis in Zul’Aman (much to Lor’themar’s dissaproval) instead of seeking reinforcements from Silvermoon.  If the man in charge of Quel’thalas’ defense is becoming distrustful of Silvermoon’s leadership, then I think we may all have cause for worry.

The Eternal Sun Shall Guide Us

And there in lies a great opportunity to advance the story of the sin’dorei!  The fact that the leadership is scheming, inept, and resort to such drastic measures as brainwashing problematic citizens could indeed be reason enough for a revolution in the ranks.  But who would rise up against Lor’themar?  The Farstriders?  They are now too few, and stretched too thin to be of any use.  It would take a powerful force to rise up and seize the reins of Silvermoon.  Someone who commands loyalty from their soldiers, is respected amongst a number of species, who has battled their demons and come out with a new found respect for the Light and what it means to uphold its ways.

Oh for Brann’s sake, I’m talking about Lady Liadrin!  Being the leader of the Blood Knights, she commands a large and powerful force that is now rekindled by the rebirth of the Sunwell.  She is on a mission to the see the blood elves returned to their former glory, and she is a reformed follower of the Holy Light.  I could easily see her leading her paladins to usurp the Regent-Lord and uniting the blood elves under her.

After all, if the blood elves quench their thirst now through the holy energies of the Sunwell, a Light-centric society would make sense. It would also introduce an interesting concept of a theocratic government, which really hasn’t been touched on before in Warcraft. The only possible exception being possibly the draenei since their spiritual leader is also their faction leader and their society has a strong affinity for the Light, but can you really say the draenei have a form of government? I always say them as refuges, not an entire civilization.  Either way, a Light based theocratic blood elf government would be a fascinating angle to explore.  It would also bolster the story of the Reliquary who are searching for ancient arcane artifacts for more power.  Why are the Reliquary bothering with this if the Sunwell now provides what they’ve needed since the Burning Crusade?  If they had rejected the Holy Light and decided to seek out purely arcane means to cure their cravings and redeem their society, well that’s suddenly a much more interesting reason.

It would also go a long way to explaining why the Forsaken would not want to get involved with the blood elves.  After all, the energies of the Holy Light are fairly painful to the undead, and their reverence for the Forgotten Shadow would put them at odds with their former allies, and would further drive the Forsaken into more isolationist tendencies of wanting to rely on their own instead of the orcs, blood elves or even the Horde in general.

I really think it would be an engaging and fascinating change up for the blood elves in Cataclysm.  Instead we got warrior trainers and Lor’themar got a few new lines.  Wonderful.  Fabulous. Great.  What wasted potential.  Well, maybe the next expansion will do SOMETHING with them?