I recently saw that you plan to include attunements in the upcoming Cataclysm expansion.  What an amazing decision!  I know nothing is quite set in stone yet for Cataclysm, after all you’ve just started with all the testing and such, and I know you haven’t even said how you will use attunements or how hard/easy it will be to do.  Even so, allow me to offer to you, a hugely successful corporation whom I’m sure reads my blog, some advice: 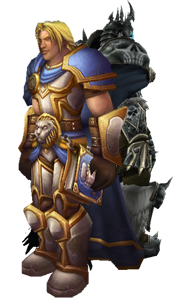 Do not dare #%$# this up! You think we’ve forgotten Burning Crusade? Do you think we chuckled a bit at that insane Black Temple attunement April’s Fool joke because we knew it was silly?! WE KNEW IT WAS POSSIBLE! After all just to get into Mount Hyjal (To play through a flashback of the most tedious annoying climax in an RTS I’ve ever played through), you would have to drag yourself and twenty-four other schmucks through not one… Not Two… But THREE entire RAID attunements.

Yes, that’s the SSC attunement, the TK attunement, and the Karazhan attunement.  Each one entailing one or more death defying feats that, depending on your group, WERE HARDER THAN PARTS OF THE RAID.  My entire guild fell apart trying to get enough people to raid, and to ensure they were attuned, just to see tier 5 before I personally had even finished KARAZHAN.  If you’re thinking with a single brain cell that you are gonna to try and pull that $%#& off again just because people are whining about things being “not epic” enough, just drink until your stupid enough to lose a prototype.

But I’m sure that it will be fine.  After all, you’re Blizzard!  The one company that has shown that they actually can learn from their past mistakes and refine them.  You did drop those crazy attunements later on because you obviously came to same rational conclusion that I stated just now.

You did use a very good attunement for the Eye of Eternity.  Granted I’ve never been inside it – but I hear it’s a neat one! I am attuned for it though, and I thought that attunement worked just great.  You needed to clear the majority of Naxxramas to get the key, and when you did get it only one person in the raid needed it.  After all, why does everyone need a key to the door.  I don’t even have a key to my neighbors door, and that doesn’t stop me from raiding his fridge.

I also see that you want to bring back attunements for heroics.  Well that’s just dandy.  I’m sure it will work out fine.  But since you – Blizzard Entertainment, creator of some of the best selling video game series and the world’s top MMO – enjoy reading my blog, I’m sure you wouldn’t be surprised to find that I have a few tiny little thoughts to share:

I swear to the dark powers that I sacrifice the blood of the innocent to at night, if you require this $#%&ing @!%* to need a certain rep again and then not give us a way to gain rep outside of inane and constant dungeon runs over and over I will call upon the blood rain and screaming torments of the children I have sent to bowels of place that makes hell seem like a day spa in Honolulu.

Do you know how many reputations I got to exalted in Burning Crusade? Five. Do you know what they were? Skyguard, SSO, Scryers, Netherwing and Ogrila. #@*&ing Ogrila. I still got the taste of Ogre #@$ in my mouth from all the #@$ kissing I had to do for those damn ogres.  But what do all of those reps have in common?  Let’s fire those two neurons together and crunch those numbers. Oh wait! I didn’t run any dungeons for them.

Don’t give me that Dungeon Finder nonsense, you’re talking about pulling a random group of people who’ve never met each other into a dungeon and them telling them they have to cooperate and play smart CC and l2assist like in the Burning Crusade days.  They only time I’ve seen a group do anything past pull them all to a spot and AOE them down was on bosses.  So if my rep grinds are dependent on those people?  May the darkness of Lystrog the Fiend Caller descend upon you slowly and without mercy!

Anyway, I know that you guys are busy working on making Cataclysm the best thing to date. I’ve even sworn of looking at teasers because I want that launch to be filled with the awe and wonder that I’ve come to love and respect from a Blizzard Entertainment, a company that is so amazing they made millions in a just a few hours by selling that awesome horse (By the way, Geeeeenius! And I love my horsie too.) that I’m sure is reading this very post and thinking deeply about what I a blogger writing under a pseudonym on the internet thinks of what they are working on.  You keep up the amazing work, you rascals.

Your Biggest Fan Ever,

P.S. I swear if you mess this up I will come for you and end you like the dark one shall end all days into an eternal night of suffering! And I totally know where you guys are too, so don’t think I’m joking.  It’s like in Washington… right?  Am I close?  On second thought, please use the contact form to send me your address so I may come and end you like the yadda yadda, you know the drill. Thanks!