The tale of Final Fantasy IV is probably one of the longest and most winding tales in the whole SNES library  of games with political backstabbing, character deaths, side quests, diplomacy, three completely separate societies on the surface of the world, beneath it and on the moon – so pardon my extreme abbreviations of the events that occur here.

Cecil, a Dark Knight of the illustrious Red Wings airship squadron that serve the Kingdom of Baron has become disillusioned with his mission of attacking defenses villages and towns to lay claim to the Crystals of Light that his King demands.  His punishment for voicing his concerns is to be stripped of his rank and sent on a mission with his dragoon friend Kain.  The mission – thought to be an envoy of good will to a village of summoners – is actually a hidden attack that unleashes bombs across the village and kills everyone.   Thus Cecil begins his quest to bring his former lord to justice for his actions.

Through his adventures he encounters and re-encounters characters like the summoner child Rydia, his beloved Rosa the White Mage, Tellah the Sorcerer, Edge the Ninja, and the meme worthy Edgar the Spoony Bard to name a few. Cecil also learns of his replacement in the Red Wings: Golbez, who has also taken mental control of Cecil’s friend Kain.  Through their adventures they uncover a sinister plot orchestrated by Golbez to steal the four Crystals of Light and the four Crystals of Darkness that reside in the Dwarven lands of the Underground to open a gateway to the moon.  To accomplish this, Golbez commands the four elemental Archfiends – one of which murdered and replaced the King of Baron.  Golbez, through much manipulations and mind controlling and backstabbing, manages to gather all the crystals and flee to the Red Moon.  Cecil and company chase after by summoning the massive spaceship ‘Lunar Whale’ to take them there.

On the Moon, Cecil meets with Fu So Ya, a Lunarian charged with watching over the rest of his people while they sleep.  Fu So Ya explains that ages ago the Lunarians sought to conquer and colonize the Blue World, but decided to stay on the Moon and leave in peace with humans. One Lunarian named Zemus was against this.  Zemus made contact with Golbez – who was half lunarian – and drove Golbez to complete Zemus’ desire of destroying the world with the Giant of Babil and sent the Archfiends to assist in the process.

Cecil and the party return to the Blue World to enter and destroy the Giant of Babil and save their world, but then must return to the moon and descend into the Lunar Core to bare witness to Fu So Ya and Golbez destroying Zemus only to unleash a being comprised of Zemus’ hatred and desire to destroy known as Zeromus.  The party defeats Zeromus and thus peace is returned to the three worlds.

I think.  I mean, there’s a sequel called the After Years, that I never played so what do I know.

If the first Final Fantasy was analogous to the simple adventure story of the Hobbit, then Final Fantasy IV would have to be Lord of the Rings.  The game is just massive.  That entire plot synopsis was about as parsed down as I could make to cover all the major bases and even then it’s like 600 words.  I skipped over major swathes of the political struggle between Baron and the neighboring kingdoms, Cecil and Kain’s extensive repemption arcs.  The fact that Rydia goes from a 8 year old kid to a 18 year old woman in the course of a few days thanks to be thrown into another plane of reality, or Tellah’s quest for revenge against Golbez.  That’s just some of the stuff in this game.  It is really that huge.  And yet, when people ask me “which one was IV?” all I can really respond with is “Oh, it’s the one with the spaceship.”

I mean, it does.  It has a spaceship.  You go to the moon. You meet Moon People.  Can you name another Final Fantasy like that? It kind of stands out.  Even so, this game is amazing and I’m happy to say it was my introduction to the series back when I was like 8 years old I think?  I would go over to my pal Patrick’s place and we would play it all night on his SNES.  Final Fantasy IV DEFINED old school RPGs to me.  From the many vehicles, spell casting system, different colored chocobos, the eidolons, and the various classes – my very fundamental view of the Fantasy genre was shaped by this game.  Not Tolkien. Not Lewis. Final. Fantasy. IV.

You can imagine my disappointment when I picked up the next ‘installment’: 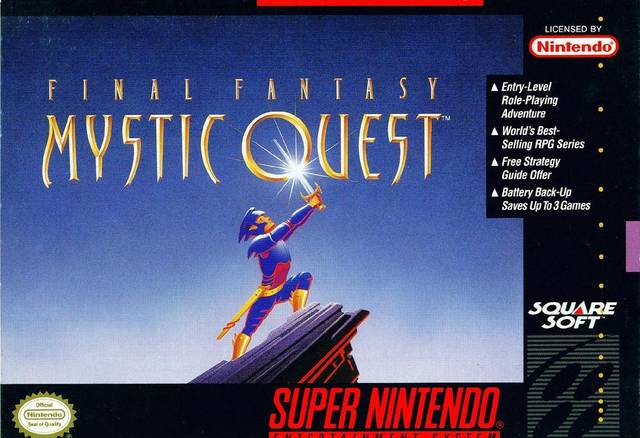 There are four kingdoms. They each have a crystal. Go save their crystal. Then fight the Dark King to find the Fifth Crystal. The end.  It really is that simplistic of a cliched plot.  The only point where it gets interesting is that near the end it’s revealed that the Prophecy that set you on the path to restore balance was actually a rumor created by the Dark King ages ago.  Why did the Dark King start a rumor that a hero would appear to save the world? I don’t know! He was bored perhaps?

Mystic Quest is a game that I barely even remembered from the salad days of my gaming youth.  A weird experiment in creating a ‘beginner RPG’ for western audiences to get eased into the genre and it at least got the beginner thing right.  The game is easy, removes a majority of player choice from who is in your party to what equipment you use, and the only real problem you’d run into nowadays is probably either frustration or the completely arbitrary subversion of Final Fantasy convention (Air based monsters are weak to Wind and earth based monsters are weak to Earth… somehow.)

The only thing that this game is apparently remembered for is the music and I can’t even say that it made that much of an impression on me.  I mean, yeah, I was young, but I remember a ton of music from Final Fantasy IV and I played that at the same age.

So should you play it?  Eh. I’d just skip it. You can’t even justify it as being part of another tangentially related series like the game boy ones (Adventure series was actually part of the Mana series and the Legend games were originally part of the SaGa series).  If you find it at a garage sale for like a buck, go ahead and give it a whirl. But seriously, don’t pay collector prices to experience it.

May the light of the Crystals guide your way!

Do you have any great memories from these classic Final Fantasy games? Feel free to share in the comments!