ULDUM, Kalimdor, July 2nd – People along the southern coast of Uldum were treated to a strange sight today.  A possible case for extraterrestrial life visiting this small blue marble called Azeroth that may or may not take place in the same universe as Starcraft.  After another routine visit from the Aspect of Death himself, witnesses spotted a strange occurrence of fire apparently levitating the air amongst the destruction.  Is this proof that aliens that can actual fly their spacecraft correctly are visiting Azeroth?  Or is this just Vrykerion’s extremely stretched attempt at making a bad pun about an old science fiction film while he stalls for a bigger post that he hopes to have up later this week?  You decide!

Well, this is it folks.  The last two camps of the 2010 Warchief Elections have delivered their ads, and boy are they…  um…  well let’s call it ‘unique.’ The first one of these we got was a small paper flyer that was pushed through our mail slot the other day.  It’s got all the production quality of a college student with Photoshop and a nearby Kinko’s. So, well, here’s Richard Knaak’s ad: 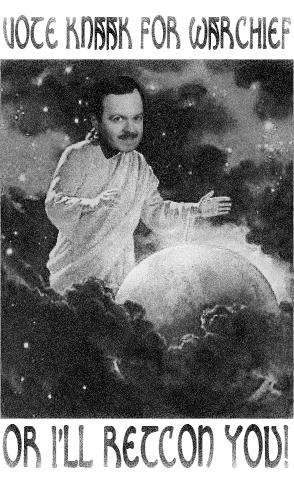 We sent out people to every single Horde capital in order to get a response on this one.  Generally, all we got was “Who is Richard Knaak?” and “What in the nether is a retcon?”  We tried to explain to them that the Draenei were a retcon which was generally met with “No. The Draenei are demons.”  After our teams decided this was a lost cause we headed to Dalaran to ask Rhonin about this.  When we showed him the flyer, he had a concerned look on his face: “I don’t normally get involved in the politics of the different factions, but I don’t think he’s joking.”

What exactly would Knaak retcon if not elected?  One would assume he’d make himself the new warchief, but there are a number of other possibilities.  What if he changed the Horde so it was a run by a council of each races leaders and there was no warchief at the head of it all?  While it wouldn’t cater to desire to be all powerful, it would thoroughly change everything for no reason and upset the fans of the Horde, which would still be in line with much of Knaak’s M.O.

However, Knaak’s ad wasn’t the only one that we got to see this week.  We finally got to see “Daval Prestor” who apparently, after realizing that no one was buying that pseudonym twice, has dropped the name and just come in to the game as Deathwing proper.  His campaign statement is a bit on the forced side in my opinion:

At first, I thought the Vote or Die thing was just a throwback to that ‘get teens to vote’ thing a few years back, but then I remembered that it’s Deathwing.  That’s probably just an honest to goodness threat to voters.  While I don’t think this course of action is necessarily legal, I am not going to be the one to tell the giant dragon that has magma pouring out of his body.  Surprisingly, the voter support for this one was very strong.  Many people we talked to were very much in favor of not dying it turns out and they said that will definitely be considering that when they show up to vote.

Not surprisingly, the Forsaken are not taken with this ad – again. “We’re already dead!  What use is it to threaten us with it again?  Deathwing is obviously missing the point of what it is to be a walking corpse.”  says Ageron Kargal, a resident of the town of Brill, “I mean, when are the Forsaken are going to get a Warchief that respects and understands us?”  To date, while some Forsaken have been polled wanting to elect one candidate or another, many are undecided for this very reason.  Who can blame them?  With the exception of Basic Campfire, all the candidates are very much alive – a fact that sets them distinctly apart from the population of the Undercity.

However, following the release of Deathwing’s campaign ad, there was quite a stir in terms of the election.  It turns out there was a problem with Deathwing’s run for Warchief.  As the Horde by laws clearly state: “A potential Warchief must exist on this plane of existence in order to run.”  We sent a correspondent to Deepholm to ask the Destroyer for his opinion – but he was quickly devoured.  However, murdering tyrant or not, his name will be taken off the ballot come election due to this.  In response to this, Deathwing issued a press release that simply stated: “You want me on your plane?  Very well. I WILL BE THERE SOON.”  The press release appeared to have been written in blood.  Possibly that of our correspondent.

However this does leave an interesting twist on Election.  With Deathwing out of the running, there is a vacant slot on the ballot.  Will someone step forth the fill it?  Who would even try considering the massive amounts of support already given to Thrall and Basic Campfire?  Is there someone in Azeroth crazy enough to jump in to a losing race?  We shall see.

The Candidates have all released their ads, and with debate season quickly approaching what will can we expect from the four final candidates? Will someone snatch up that last open ballot position?  Keep it tuned in here to OddCraft as we are dedicated to bringing you up to date coverage of the Warchief Election!

Earlier today I decided to blow off some steam at work by coming up with a series of campaign ads for different candidates for Warchief.  They turned out to be quite popular around the Twitter-sphere, so I thought I’d make up some campaign buttons for those who wanted to show their support!  Each one features one of the candidates: Thrall, Garrosh, Basic Campfire, Deathwing, or Richard Knaak, as well as a small slogan for their campaign.  Grab the one you want or a ZIP file of all 5 at the bottom and show support for your candidate of choice!  Also, if you use one on your blog, profile or websites, if you could point others to where to find their own it would be most appreciated. 😀 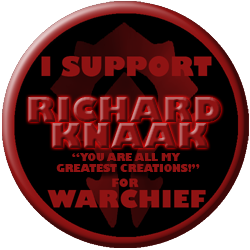 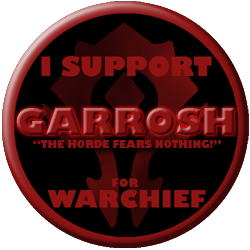 If there has ever been a point to envy the NPCs of Azeroth, it’s the fact they can have last names.  Sylvannus Windrunner, Muradin Bronzebeard, Cairne Bloodhoof…  even the random people in the inns can have last names.  But the players? Nope.  Never.  Closest we get is Titles, and as much as I enjoy being called Loremaster Exil or Bloodsail Admiral Vrykerion, it’s not exactly the same thing as Exil Williams or Vrykerion Thoriallus.

So it strikes me as interesting when an NPC doesn’t have a last name.  Sometimes it can be a cultural thing.  But when a well known figure who does have a last name chooses to not show it…  I kinda start getting curious.  Such is the nature of one Rhonin of the Kirin Tor.  He sits in Dalaran, saying next to nothing. He gives out one quest for a dungeon, and sends a box of potions for dinging 80.  All the while, the sole name RHONIN hanging over his head.